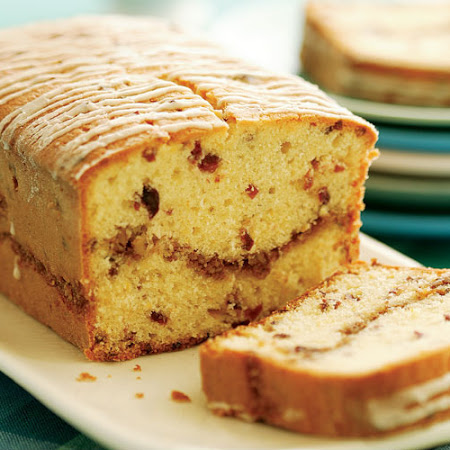 Position a rack in the center of the oven and heat the oven to 325°F. Grease an 8-1/2x4-1/2-inch loaf pan with nonstick cooking spray or butter and dust with flour; tap out any excess. Make the streusel: Put the walnuts, brown sugar, and cinnamon in a food processor. Process with short bursts until the walnuts are chopped into small pieces. Make the cake: In a medium bowl, whisk the flour, baking powder, salt, and orange zest until well blended With an electric mixer, beat the butter on medium speed until smooth, about 1 minute. Sprinkle in the sugar and beat well until slightly fluffy, about 2 min., scraping the bowl well. Add the eggs one at a time, mixing well after each addition. Beat in the vanilla. With the mixer on low, add about a third of the flour mixture and mix until almost combined; add half of the buttermilk and mix again until just combined. Rrepeat with another third of the flour, the last half of the buttermilk, and then the remaining flour, mixing each time until just combined. Stir in the dried cranberries with a rubber spatula. With the spatula, spread half of the batter into the loaf pan and sprinkle evenly with the walnut streusel. Spread on the remaining batter. Bake until the loaf is golden brown and a skewer inserted in the middle comes out clean, 60 to 75 min. Let cool in the pan on a rack for 10 min., turn out of the pan, and let cool completely on the rack. Make the icing: In a small bowl, mix the confectioners’ sugar, cream, and cinnamon with a small spoon until there are no lumps. The icing should drizzle smoothly in a thin line from the tip of the spoon; you may need to add up to another 1 tsp. cream. Drizzle the icing over the cake in thin parallel lines and let set for about 15 minutes before serving. Slice gently with a serrated knife. 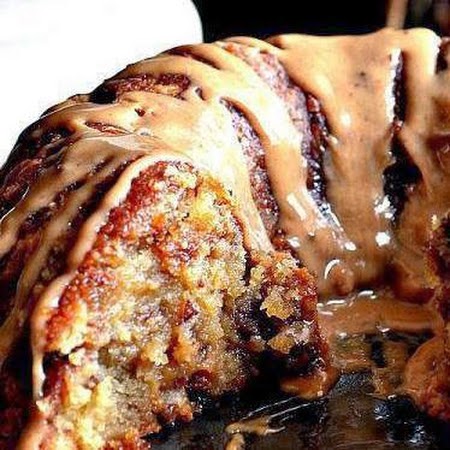 Directions:
Preheat oven to 325 spray a 12 cup Bundt pan with cooking spray with flour
Beat butter until creamy. Add sugars beating until fluffy. Add eggs one at a time. In medium bowl combine flour, baking powder and salt. Add flour mix to batter alternately with milk, beat until just combined. Stir in toffee buts and pecans. Spoon batter into pan and bake 85 minutes or until wooden pick comes out clean. To prevent excess browning, cover cake with foil while baking. Let cake cool in pan for 10 minutes. Remove from pan, and let cool completely on a wire rack. Spoon Caramel Drizzle over cooled cake. Directions for Caramel Drizzle
In a medium saucepan, combi… 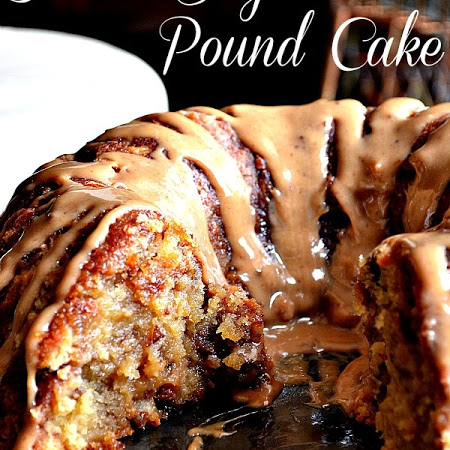 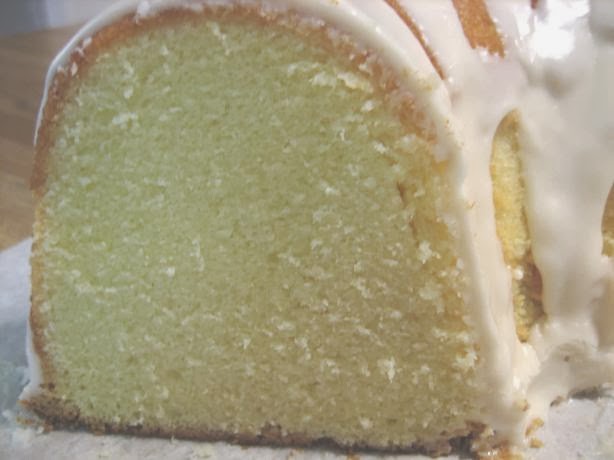 "This recipe appeared in Our local newspaper about 20 years ago. The recipe comes from an old lady who was a dear friend of Elvis. She made this cake for him every Christmas and on special occasions. She made the paper promise to keep her name anonymous for fear that people would deluge her Tupelo Mississippi home with requests by fans to make her cakes for them."

Directions:
Butter and flour a 10 inch tube or bundt pan.

Thoroughly cream together sugar and butter.  Add eggs 1 at a time, beating well after each addition.  Mix in half the flour, then the whipping cream, then the other half of the flour.  Add Vanilla.
Pour into prepared pan.  Set in COLD oven and turn heat to 350ºF.  Bake 1 hour to 70 minutes, until a sharp knife inserted in cake turns out clean.
Cool in pan 5 minutes. Remove from pan and cool thoroughly.  Wrap…